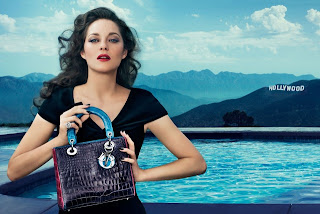 From her global travels to Paris, New York, Shanghai, and London, the mysterious yet opulent Parisian woman known only as Lady Dior arrives in Los Angeles to etch her style mark on the famed Californian city. Once again calling on its beloved spokeswoman to portray the character, renowned French actress Marion Cotillard, Christian Dior has filmed yet another chapter of its creative marketing campaign saga to promote the label's signature Lady Dior handbag. In the new film L.A.dy Dior, although she has never been given a name, Cotillard portrays a shaken A-list actress called "Margaux" who wants nothing more than to be free of the intense Hollywood lifestyle. From the limo and make-up studio to the ultimate movie set in the Hollywood Hills, the entire short-film features countless variations of the remarkably elegant Lady Dior handbag as well as a cast fully styled in nothing but Dior. Keep watching to see where in the world Lady Dior is to visit next.